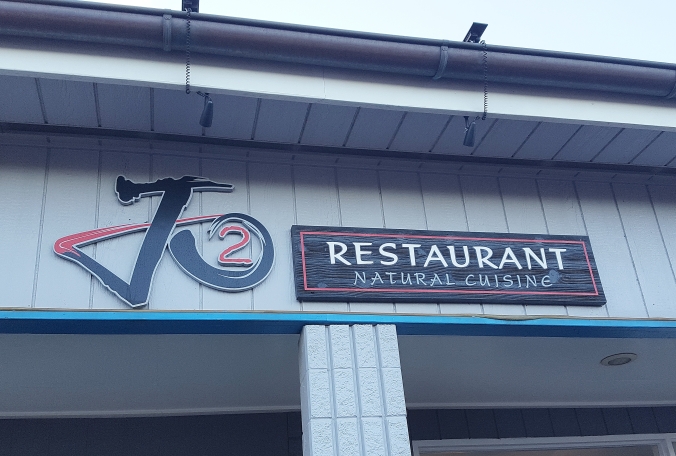 Great place to spend a week in Poipu Beach, Kauai.

On our first trip to Kauai in 1990 (to celebrate our twentieth wedding anniversary), we discovered a delightful restaurant in Kapaa called A Pacific Café. The chef and owner was Jean Marie Josselin. Twenty-seven years ago, going beyond the traditional idea of luau food – poi, pineapple, and roast pig – he and eleven other chefs started the Hawaii Regional Cuisine movement, which celebrated local farmers and producers. This was long before “farm-to-table” became the buzzword that it is today. 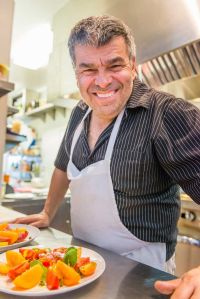 Chef Josselin was born in Chamonix, in the French Alps, and was educated at Paris’ Mederic Culinary School. After working at top restaurants and hotels throughout Europe and the mainland United States, Chef Josselin arrived in Hawaii in 1985 at the Hotel Hana-Maui. In 1988, he moved to the Coco Palms Resort on Kauai, where he won numerous awards, including the Hawaii Seafood Championship in 1988 and 1989 and Grand Prize in the National Seafood Challenge of 1989. In 1990, Chef Josselin felt he was ready to do his own thing and chose to open up his first restaurant: A Pacific Café. With classic French training, Chef Josselin infused his cooking with an inspired use of flavors and techniques from Pan-Asian cuisine—this became his signature style.

A Pacific Café was named “Best Restaurant in Kauai” by Honolulu Magazine throughout the ‘90s. Bon Appétit referred to it as “one of the best restaurants in the country.” Chef Josselin was nominated Best Chef for his region (Northwest/Hawaii) six times by the James Beard Foundation and was also a featured chef at the James Beard House in New York City.

A Pacific Café became so popular that Chef Josselin opened branches on Maui and Oahu. In 2000, like many top chefs, he was lured to Las Vegas, opening his 808 restaurant at Caesars Palace. A second 808 followed in San Diego in 2003. At one time, he was presiding over seven restaurants in Hawaii and the mainland.

By 2008, Chef Josselin closed them all and for two years, traveled to Europe and Asia. In 2014, he returned to a (dreary) shopping center location in Kapaa with JO2, a small, minimalist restaurant – sleek and sophisticated, yet casual. He is frequently seen in the kitchen, preparing such delicacies as Wagyu beef cheeks in an au jus (see my description below). Beautiful presentations frame the food which is clever and deceptively simple. A wine and sake list changes seasonally.

We have eaten at most of the top rated restaurants in Kauai but this one is, by far, the best. It was on my list before we even got to Kauai this year so we dined there the first night and were so impressed that we went back for a second dinner. 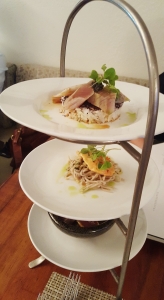 On the first night, we ordered from the a la carte menu, beginning by sharing the JO2 Seafood Sampler, presented on a fun three-tiered tower. 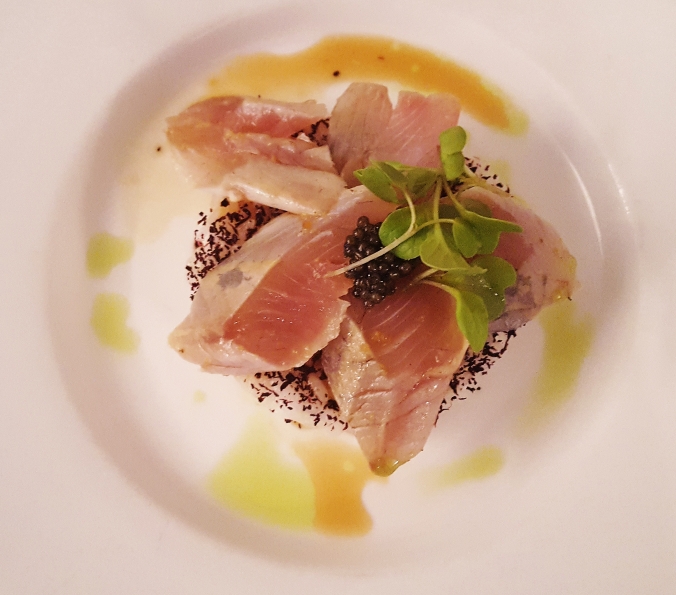 At the top tier was lightly seared Hamachi sashimi with paddlefish caviar and a trace of ponzu.

The middle layer had some really fresh and tasty King Salmon over soba noodles.

The bottom level was a bowl of Ahi Tataki Style with a bit of green papaya salad. The King Salmon was the best of the three, but all were pretty sensational. In an island setting, you expect the fish to be fresh and this did not disappoint. We could have ended our meal there and been happy. But noooo, there was more to come.

For her main course, Karel ordered the appetizer portion of JO2’s Poached Scallop Ravioli. It was served with tobiko (flying fish roe) in a yuzu (a Japanese citrus fruit similar to a lemon) butter sauce. The scallops melted in your mouth, the tobiko provided a little zip and the yuzu butter sauce tied it all together.

I selected the Local Opah (also known as Moonfish) Belly with Lobster Tempura, some sea asparagus, and a clam coconut broth. Some Kauai restaurants tend to overcook their fish – which is unfortunate and a waste of good protein – but not here. The opah was perfectly prepared. The accompaniments were equally delicious.

For dessert, we shared the Yuzu Lemon Cheese Cake with Coconut Guava Gelato. It was served in a neat little jar that made passing it back and forth easy. Have you ever seen two adults fighting over the dessert???

For our second dinner, we tried the early bird prix fixe. For $35.00 per person, we got an appetizer, main course, and dessert.

We both started with the Organic Tomato Sampler which featured a stack of local tomatoes of different colors and flavors. All were equally beautiful and tasty.

I have often referred to my love of beef cheeks so there was no question in my mind of what to order. Here I had Wagyu Beef Cheeks, braised for 24 hours and served in a rich braising jus. They were some of the best I have ever tasted (do I say that every time?).

We both chose Valrhona Chocolate Crème Brulee for our dessert which was served with a hearty scoop of Expresso ice cream. After having finished an extremely rich and filling dinner, I am not quite sure how we managed to fit this super delicious dish in, but somehow we did. Perseverance!

We were very impressed with JO2 and plan to go back on our next trip to Kauai. Chef Josselin has captured the essence of contemporary Hawaiian cooking expressed in a delicious and beautiful manner.

Note: we are going to be traveling over the next couple of months and spending Christmas with family and friends. So, I will not be publishing new pieces on a regular basis until after the first of next year.  I will republish some of my initial blogs for those of you who may have missed them and want to catch up. If you wish to comment, I will do my best to respond as quickly as possible when I am in WIFI range.

I sincerely wish everyone happy holidays and a wonderful new year!