“Our products are very natural, very traditional, very classical, very genuine. When you drink our products, you feel the soil, the terroir.” – Dr. Susanna Bianco

Barbaresco is a red wine produced from 100% Nebbiolo grapes and has a flavor somewhat similar to Barolo. The two wines are obviously distinguished by an individual winemaker’s methods but are more influenced by the two distinct growing areas that are only 12 miles apart.

The village of Barbaresco from the top of the tower

Because Barbaresco is a more compact sub-region of just over 1200 acres, the vineyard terroirs tend to have a more consistent flavor profile than Barolos.

Barbaresco has slightly warmer temperatures and more of a marine influence from the Tanaro River so the grapes usually ripen earlier. As a result, Barbaresco wines are less tannic and more approachable at an earlier age. DOCG (the Italian governing agency Denominazione di Origine Controllata e Garantita) rules require all Barbaresco wines to age for at least 26 months in wood with a total of 50 months for “Riserva” wines. The wines have a ruby red color compared to the garnet color of Barolo and rich, spicy flavors with perfumed floral aromas.

The wine gets its name from the tiny village of Barbaresco which is dominated by an ancient torre (tower) overlooking the Tanaro river valley.

Karel, at the top of the tower.

The torre is officially dated to some time before the 11th century. However, since a Roman spoon was found in its base in 1897, experts suggest it may have existed in Roman times. It is 120 feet in both height and diameter and is the highest structure in the Langhe landscape.

Our new friend, Alberto, made an appointment for us at a small (1500 cases per year) family winery, Gigi Bianco, established by Vincenzo Bianco in 1870.

Dr. Susanna Bianco in the cellar that was built by her family over 125 years ago.

We met Dr. Susanna Bianco at the door to the cantina below the torre in Barbaresco. Susanna is a delightful young woman, the winemaker, and the fifth generation family member to be running the winery. She and her husband Salvatore Angelico continue the family philosophy of:

The vineyards of Gigi Bianco are tended with the utmost attention to producing grapes capable of providing fine and elegant yet fruity wines which are limpid and clean. We toured the cellar beneath the torre where wines are vinified and aged, then walked across the lane to the tasting room. We tasted a crisp, light 2014 Chardonnay Langhe, the 2010 Langhe Nebbiolo, the 2012 Barbera d’ Alba, and a vertical tasting of the 2009-2012 Barbaresco Ovello.

The 2010 Langhe Nebbiolo was made from 100% Nebbiolo grapes. It had an intense, bright red color with a silky, well-balanced, fruity taste. The wine spent about a year in small French oak casks with several additional months of bottle aging.

The 2012 Barbera d’Alba, from 100% Barbera grapes, was an intense red color with aromas of juicy berries. The finish was long and rich. It was fermented in steel tanks and aged in 225 litre casks and small oak barrels.

The four Barbarescos were uniformly classic and elegant examples of the genre with a bright ruby red color, a light floral bouquet, medium fruit and a long spicy finish. All were aged in old Slavonian barrels of 10 hectolitres and small oak casks. 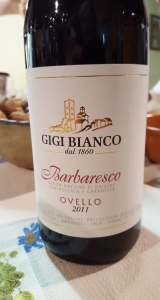 The 2009 obviously had the advantage of longer bottle age but the 2011 was a shining star destined for greatness over the next six to ten years.

6 thoughts on “Tasting Barbaresco under an 11th Century Tower”