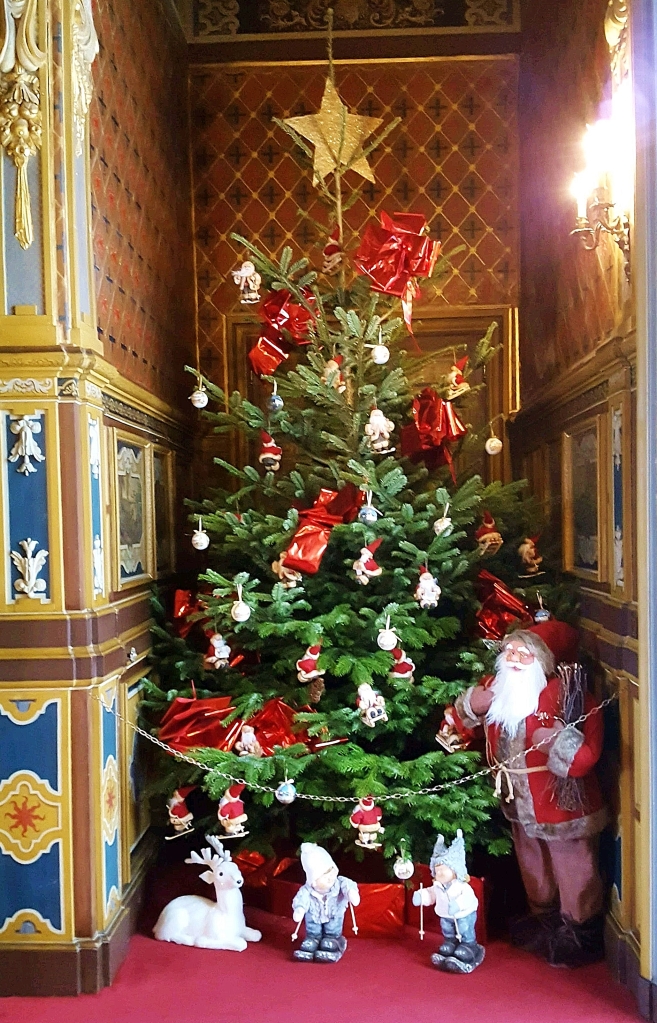 Christmas at the Chateau de Cheverny

I’ll be home for Christmas

You can plan on me

Please have snow and mistletoe

And presents on the tree

“I’ll Be Home for Christmas” is a Christmas perennial written by the lyricist Kim Gannon and composer Walter Kent and recorded in 1943 by Bing Crosby, who scored a top ten hit with the song. The song is sung from the point of view of a soldier stationed overseas during World War II, writing a letter to his family. In the message, he tells the family he will be coming home and to prepare the holiday for him.

So, with that little intro, I want to wish everyone a very merry Christmas and hope that you are all home with your family and friends, enjoying delicious nibbles and a glass of bubbly in front of a roaring fire.

As Christmas approaches, I thought it might be fun to look back on some of the great food and wine that Karel and I have been fortunate enough to share over the past year – in other words – the Best of 2019!

When I began to sort through my photos and notes, I discovered that we really had more “bests” with dishes we prepared at home for friends or just for each other. So, for “home cooking,” in no particular order, here we go:

Vichyssoise. Ok, its cold potato soup but, what potato soup! Karel has been making this with special meals for over thirty years and it is always delicious. The recipe comes from one of the Gourmet Cookbooks that we have used forever. It contains potatoes (duhh), leeks, butter and impossible amounts of heavy cream (please don’t tell my cardiologist).

Portuguese Fish Stew. This is a recipe that I developed. The stew is filled with mussels, clams and Spanish chorizo in a spicy tomato broth. It was a big hit when we served it last February for our friend Christian’s birthday. 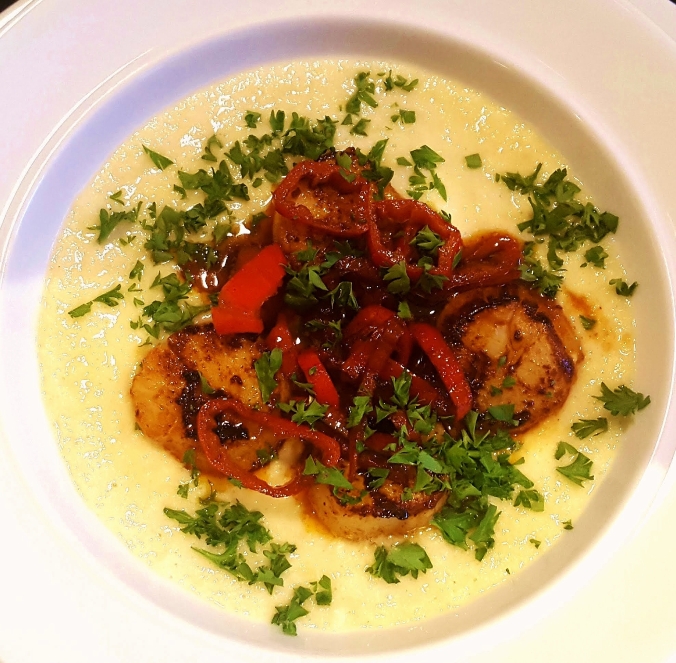 Scallops with Corn Crème. We had an abundance of delicious corn last summer so I came up with this dish to take advantage of it. The corn crème is sweet, smooth and incredibly tasty. I topped it with some seared scallops and finished with a spicy Fresno chili sauce.

Wylie Dufresne’s French Toast.  Chef Wylie Dufresne is famous for his groundbreaking cooking at WD~50.  When I found his recipe for French Toast, I had to try it. Although a little involved, it is well worth the effort. His recipe called for maple syrup but we are happy with lots of melted butter and a heavy dusting of powdered sugar.

Beef Cheeks with Scalloped Potatoes. Karel and I typically pull out all of the stops for each other on Mother’s Day and Father’s Day. We celebrate with special foods from morning until night. Last year, I chose an entrée that I have often ordered in restaurants but until now had never attempted at home. Beef cheeks are difficult to locate but my favorite local butcher, Sonoma County Meat Company came through like the champs that they are. Beef cheeks literally melt in your mouth when braised for hours in rich, beefy broth. I served them with some simple scalloped potatoes and a hearty Cab. The result was sublime – a delicious Mother’s Day feast!

We often fall into the trap of going to the same restaurants over and over because they are a known entity and have proven their value time and time again. The dishes that I have selected from last year’s restaurants are relatively new to us but will, no doubt, be on our list for a long time to come.

RoVino Restaurant + Wine Bar is found in San Diego, California – our old “stomping grounds.” In less than 3 years, RoVino has been recognized as one of San Diego’s best Italian Restaurants. They were awarded “Best New Restaurant” in 2017 by the San Diego Magazine, “Best Italian Restaurant” by both San Diego Magazine and Ranch & Coast Magazine in 2018 and 2019. Last March, we enjoyed a delightful al fresco lunch with friends in the bustling Little Italy neighborhood.

Cuistot, in the El Paseo area of Palm Desert, California, is a beautiful French restaurant with amazing cuisine. The Chef-Owner, Bernard Dervieux, was born in Condrieu, France. He worked under the direction of Chef Paul Bocuse in Lyon, France before coming to the U.S. in 1974.

At Cuistot, I was treated to Chef Dervieux’ Roasted Rabbit Saddle and Leg. This is a French Basque dish with the rabbit layered on a ragout of braised, savoy cabbage and a mirepoix tarragon jus. The rabbit was fork-tender and the tarragon jus melded all of the vegetable flavors perfectly. It was probably the best rabbit that I have ever tasted.

La Salette Restaurant is in the town of Sonoma and has become one of our favorite dining spots. Chef Manuel Azevedo’s signature Cozinha Nova Portuguesa – “New Portuguese Cuisine” – celebrates the varied and complex flavors of his native Portuguese homeland while adapting them to the best ingredients in California.

At La Salette, I was taken with their dessert presentation of an almond tuile dome which, when cracked open, revealed a delicious custard flan topped with caramelized banana bits, all in a caramel sauce. A treat for the eye as well as the palate.

Fruits of the Vine

When we are dining with wine (OK, when do we not dine with wine – breakfast maybe?), I usually pull something out of my cellar that has aged for a few years. This is true whether eating at home, at a friend’s home or in a restaurant. Restaurants do typically charge a corkage fee and that is only fair to them. The wines that I am including in this list are those that have been newly released this year.

We were introduced to J. Rickards Winery by our friends, Don and Jean, up in Cloverdale. I am excited when someone pours a new wine for me and I immediately love it. This was one of those special events.

The J. Rickards 2018 Croft Vineyard Sauvignon Blanc is a delight. Its melon and citrus aromatics precede complex fruit flavors finishing with a nice crisp mouthfeel. It does not have the grassiness that wrecks many Sauvignon Blancs. This is a perfect summertime (or fall or winter or spring) wine.

I have noticed more and more Rhone-style wines slipping into my cellar during the last few years. They are much more involved than I once believed. Give them time to smooth out their tannins and you can have a beautiful wine. 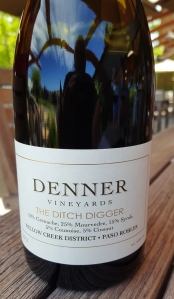 I have previously talked about the wines of Denner (click to view) so you won’t be surprised to see one of them here. After a bit of mental wrestling, I chose Denner’s 2013 The Ditch Digger. OK, 2013 is not a new release per se. However, it is a new release of one of their library wines so that counts in my book. I reviewed this wine earlier so I won’t repeat a lot of detail. I will simply point out that Wine Advocate rated it at 92-94 points. I am happy to see that they agree with me.

As you may have discerned, I love Pinot Noir. It is my “go-to” red wine. Since we belong to several wine clubs that have new releases throughout the year, this choice was especially hard. After much deliberation, my choice is the 2016 Hartford Court Arrendell. To me, this wine provides the purest expression of a great Pinot Noir. It has beautiful dark ruby colors with a fascinating iridescent rim when you hold the glass at just the right angle. The bouquet brings ripe cherries and strawberries to mind and the rich, juicy flavors just go on and on and on.  A splurge (it is not cheap) but well worth special occasions or holidays.

And speaking of holidays, it’s time to start looking for presents under the tree.

to my American and English friends: Merry Christmas

to my French friends: Joyeaux Noël

to my Italian friends: Buon Natale

Bye for now – see you in January!

9 thoughts on “I’ll Be Home for Christmas”