“After one taste of French food … I was hooked. I’d never eaten like that before; I didn’t know such food existed. The wonderful attention paid to each detail of the meal was incredible to me. I’d never really drunk good wine before, and knew nothing at all about it. It was simply a whole new life experience.” – Julia Childs

In 1934, French food writer Curnonsky declared Lyon, “the world capital of gastronomy.” The city, located at the junction of the Rhone and Saone rivers, dates back to 43 B.C. when it was founded as a Roman colony. 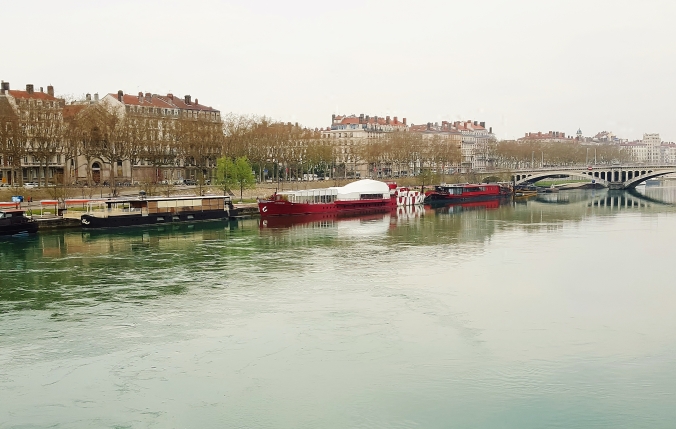 It is surrounded by the great delicacies of France: wines from the Rhone Valley and Beaujolais, produce and olive oil from Provence, Charolaise cattle, blue-legged Bresse chickens, pork, game and seafood from both fresh and salt water.

Dining options in Lyon range from Paul Bocuse’s three star L’ Auberge du Pont de Collonges to neighborhood bistros, or bouchons. Tradition has it that the bouchon began as an inn for merchants and travelers. The term can mean anything from a plug, a cork, or a bunch of straw used to wipe down sweating horses after being unbridled from their carriage. The latter seems to have some historical validity so it is the term I chose to accept.

Bouchons really came to be known for their delicious but affordable working class food after World War I when France’s economy crashed. Families who had been servants and cooks for the wealthy found themselves out of work. Meres Lyonnaises were mothers and grandmothers who were trained to cook for the bourgeoisie and cook they certainly did. With meres in the kitchens and their husbands handling the “front of the house”, bouchons flourished. The cuisine is unfussy but exquisitely prepared. The heart of Lyon’s traditional cuisine is served with elegance and finesse in a friendly, relaxed atmosphere.

While visiting Lyon, I had to try a bouchon but also wanted to sample a more modern French cuisine. I chose Daniel et Denise Crequi and La Table 101 (which we will visit in my next post).

According to Chef Joseph Viola of Daniel et Denise, “A bouchon is something very specific to Lyon and quite unique: a restaurant serving dishes reminiscent of what was served by the famous Mères Lyonnaises (the first women to open home-cooking restaurants in the city). It’s a timeless place with a traditional décor – a bar, copper pans, checked tablecloths – serving typical, simple, home-cooked dishes prepared from fresh, local produce: quenelles, all manner of pork dishes including charcuterie, chicken liver loaf, ‘cervelle de canuts’ (a soft cheese dip), praline tart, etc. – and all washed down with that essential bottle of local wine! A warm and friendly atmosphere, generous portions, and the pleasure of sharing with friends and family – a bouchon is a home from home!”

Daniel et Denise is a bouchon Lyonaisse that checked all the boxes – several small rooms, dark wood paneling, framed photographs and prints on the walls, red-checked tablecloths (with an upscale touch of logo-embroidered napkins) set on small tables so close to each other that it was easy to start a conversation with our neighbor.

My wife and I had 8:00 reservations so, at the stroke of 8:00, we walked into a virtually empty room. The atmosphere was warm and the aromas coming out of the kitchen ethereal. (According to my dictionary, “ethereal” means “delicate and light in a way that seems too perfect for this world.” OK, I’ll go along with that.) By the time we left, after a leisurely two (plus) hour meal, nearly all of the tables were occupied. We had forgotten that the French usually dine later than Americans.

I greeted our hostess with my best Rick Steve’s French, “Bonjour Mademoiselle!” She smiled graciously and asked if we would like the English menu. I guess we were pretty obviously American. As an aside, my wife must have chosen the correct wardrobe because several times during the trip, strangers walked up to her and asked directions in French.

Daniel et Denise offered several menu options, including one that featured iconic Lyonnaise offal dishes including calf’s brains pan-fried in butter à la Provençale, sautéed tripe à la Lyonnaise, pan-fried calf’s liver, deglazed with vinegar and served with parsley vinaigrette, or veal’s head cooked in stock with a sauce ravigote. Neither my wife nor I, are particular fans of offal so we both settled on the Menu Degustation (Tasting Menu).

Chef Viola emphasizes in his menus that most of the ingredients are of French origin and in some cases, he lists the specific source. Everything we tasted was prepared to the highest culinary standards.

The dinner included four courses plus dessert. We decided to include wine pairings which brought our total bill to €114. Keep in mind that this includes taxes and service.

Our meal started with ½ slice of duck foie gras and sweetbread pate en croute served with a small green salad. It is easy to see how this dish was named a world champion in 2009.

This was followed by a mini Lyonnaise Pike Quenelle with Nantua (crayfish) sauce. I have enjoyed quenelles but this was one of those moments that set a new gold standard.

The third course was Filet of Cod a la Grenobloise. It was prepared with butter, lemon, parsley and house-cured capers and was probably one of the best pieces of fish that I have ever tasted.

The main course was Bresse chicken with morel mushrooms and cream. Simply sublime.

Our dessert was Chef Viola’s unique take on Tarte Tatin with St. Genix pralines, light and full of apple flavor – a fine way to end the meal. We were served three wines that perfectly complemented the food plus a late harvest white Beaujolais with dessert.

Our first dinner in Lyon was an extraordinary meal. We walked back to our room utterly delighted and filled with warm satisfaction. This trip was going to be a pleasure.

One thought on “The World Capital of Gastronomy”