“All four elements were happening in equal measure – the cuisine, the wine, the service, and the overall ambiance. It taught me that dining could happen at a spiritual level.” –  Charlie Trotter

After a morning spent shopping in the Vaison-la-Romaine marché, anyone would be in dire need of lunch and we had been told to try Les Florets in nearby Gigondas. It is a hotel and restaurant located in the beautiful foothills of the Dentelles de Montmirail above Gigondas and has been owned and operated by the same family for three generations. It features excellent Provençal cuisine using fresh produce from the area with service that was very friendly and attentive.

Although lunch and dinner can be enjoyed under a lovely shaded terrace, we chose to eat in the dining room because it was still a little too chilly to spend several hours (yes, hours) eating outdoors.

The dining room expressed casual country elegance and the food matched. I am frankly surprised that this kitchen has not garnered at least one Michelin star. 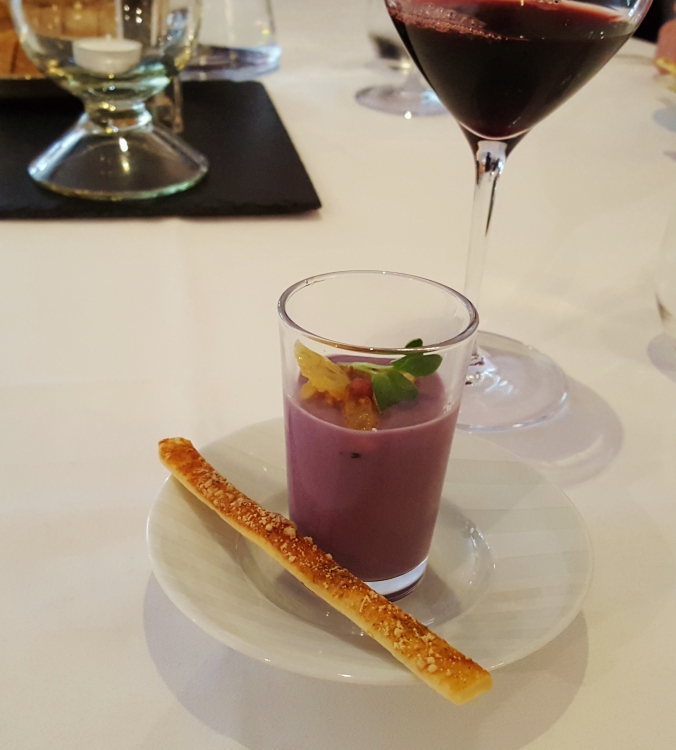 The chef, Franck Parys, prepared all dishes with classic selections of the best local products presented within beautiful compositions.

One entrée was ocean fresh sautéed langoustine served with grapefruit, accented with avocado cream and spiced with chili pepper from Espelette (a mild chili pepper from the village of Espelette in the Pyrenees Mountains and commonly utilized in Basque cooking). The shrimp were firm and crisp in your mouth while the interesting combination of the other ingredients put everything in balance.

Another entrée was a dish of succulent scallops presented on a layer of creamy soup made from pureed sweet potatoes along with morsels of pears that added structure to the soup. This was also an unusual combination of textures and flavors that blended perfectly. The sweet potatoes brought back southern memories, although I have never had a sweet potato soup, and certainly never with scallops. 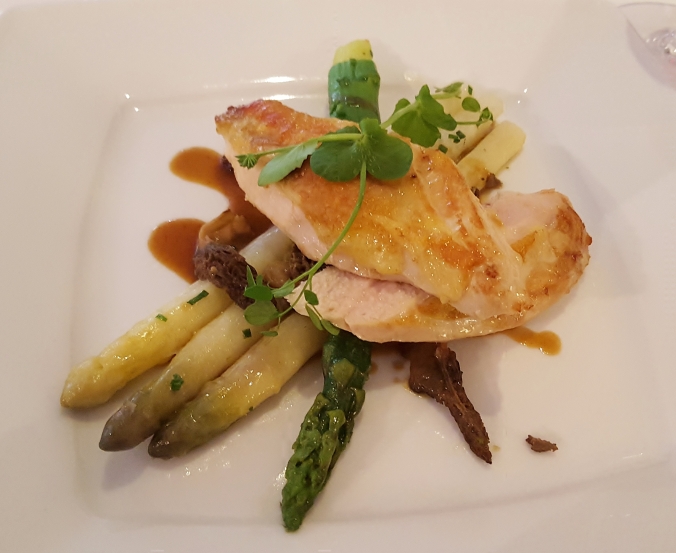 One of the plats was a delicious guinea fowl filet with green and white asparagus complemented by a yellow wine sauce. The guinea fowl had moist white meat like chicken, but tasted more like pheasant without as much “gaminess.” The asparagus was nothing like any other asparagus I have tasted. It was almost sweet but with a “green” flavor that complemented the flavors of the fowl. The wine sauce held everything together in a perfect assemblage of tastes, colors, and textures.

The desserts were beautiful and sublime. The first was a perfectly poached pear in a spicy sauce with a thin crispy shortbread wafer. 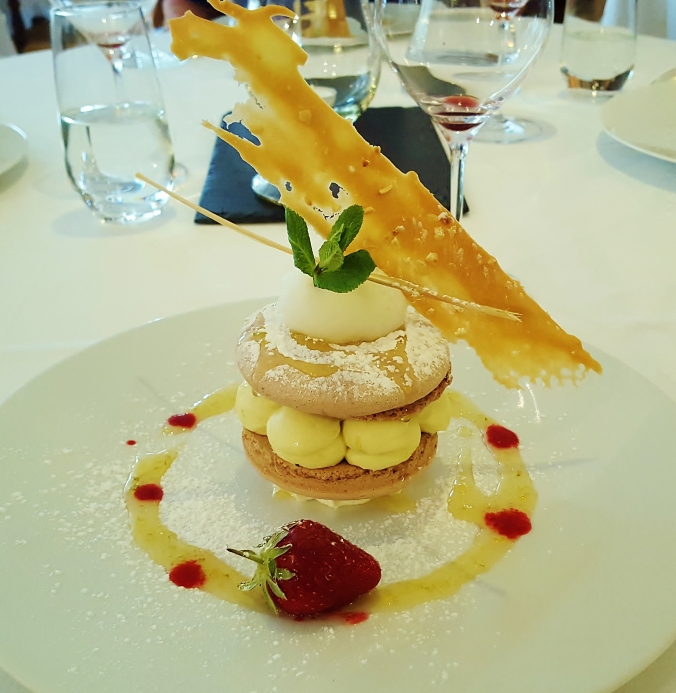 The second was a Tonka bean macaron filled with white chocolate cream and accented by a delicately tart lime syrup “swish”. The Atlantic Magazine calls Tonka bean “an ingredient so good it has to be illegal”. It is illegal in the U.S. and there is a long story about why. Pure foolishness on the FDA’s part – look it up!

We walked off at least a part of our lunch exploring the beautiful gardens and terrace and wandered through the reception areas of the hotel. Les Florets would be a great place to stay if you were in the area and didn’t know Michel.

Since we were in Gigondas, I felt that it was only right and proper to pick up some wine for dinner. Gigondas is one of the top crus in the Southern Rhone, and in some instances, can dominate its famous neighbor Chateauneuf du Pape.

On the road out of town, we stopped at the shop of Pierre Amadieu. 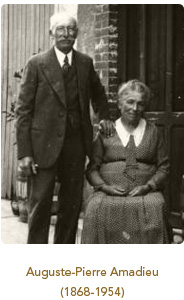 The Domaine was founded in 1929 by Pierre’s grandfather and is known for wines having good typicity (the degree to which a wine reflects its varietal origins, and demonstrates the characteristics of the grape from which it was produced) as well as being reasonably priced.  Pierre Amadieu is the winemaker. He works with his uncle Claude who runs the vineyard. They work together acknowledging deep respect for the soil and following the traditions of their family. They may not always be rated among the top labels in a vintage (although in my opinion, they should be) but they always provide a high degree of gratification.

After tasting the range of wines that were offered that day, we settled on a 2014 White Chateauneuf-du-Pape, La Paillousse at 19.50 € and a 2012 Gigondas, Le Pas de L’Aigle at 18.50 €. The white is a blend of White Grenache, Bourboulenc, Roussane and Clairette. I found it somewhat similar to a grand cru Chablis with fragrant floral aromas, a delicate peach flavor, and a crisp minerality.

The Le Pas de L’Aigle (WS 92/100 points) was made from a blend of 90% Grenache and 10% Syrah. This wine was aged 24 months in large oak casks, was ripe and densely concentrated with flavors of black cherries, raspberries, plums and rich spices. It is a perfect example of what a great Grenache should represent.

Wine in hand, we headed back to our house in Sablet.

2 thoughts on “Some Food and Wine in Gigondas”