I couldn’t leave the subject of pork without adding my notes about Brunswick Stew. This is one of the great iconic Southern dishes that is almost unknown outside the south. Most people know or have heard of grits, fried chicken, fried green tomatoes, collard greens, etc. etc. But mention Brunswick Stew and you get a glassy-eyed stare or the question, “Don’t they make that with squirrels?” My answer is “Maybe, but not at my house.”

The runt in the middle is me with my grandparents

I grew up eating Brunswick Stew with barbecue. The two were always served together for some reason. The stew has been traditionally considered a side dish to ‘cue. A typical barbecue plate at my family’s table was a healthy serving of chopped (not sliced) barbecued Boston Butt (slow smoked with sauce on the side), Brunswick Stew, cole slaw, “light” bread, and a stack of napkins. The beverage of choice was, of course, sweet iced tea. Later on, in college, I replaced tea with Pabst Blue Ribbon.

The dish is a thick stew, not a soup. Depending on your state, neighborhood, and financial condition, the meat(s) included any combination of pork, beef, chicken, venison, rabbit and sometimes the aforementioned squirrel. My grandmother used pork and beef and didn’t mess around with a lot of vegetables. Corn, tomatoes, onions, and sometimes lima beans (we called them butter beans) about summed it up. Her recipe and methods stemmed back from the eighteen-hundreds when it was simmered outdoors over an open wood fire in a 25-gallon iron pot. The ingredients were slowly cooked until the meats were broken down into small bits and the mixture merged into a thick, rich magical elixir. 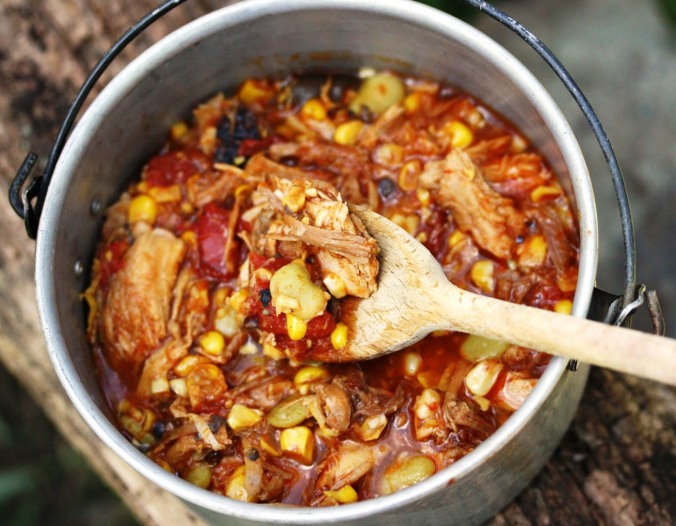 I am including both her original recipe and my update in case you don’t want to cook a batch for 75 people or don’t have access to a hog’s head or don’t have a 25-gallon iron pot. The stew will not – can not – be the same but judging by my taste memory, it is a pretty fair approximation.

(This is my grandmother’s original recipe from the farm, circa 1950. A contemporary version follows below)

(This version will not taste the same but is a close approximation.)