“For the present, I confine myself to the physical want of some good Montepulciano…this being a very favorite wine and habit having rendered the light and high flavored wines of a necessary of life with me. It was most superlatively good.” – President Thomas Jefferson

After our visit to Bologna (which was way too short), we headed south to San Gimignano which is in the province of Siena in Tuscany. San Gimignano is famous for its medieval architecture and is unique with the preservation of its tower houses which, with its hilltop setting and encircling walls, form a beautiful and amazing skyline.

Between the 10th and the 13th century, noble families and upper middle-class merchants who controlled the town built many fortified tower houses (probably 72 at the peak) as symbols of their wealth and power. While in other cities, such as Florence, most or all of their towers have been brought down due to wars, catastrophes, or urban renewal, San Gimignano has managed to conserve fourteen towers of varying heights. These towers proudly rising above nearby palaces preserve the look of a feudal Tuscan town controlled by rival factions ever ready for conflict. It illustrates a significant moment in history which cannot be found to the same extent in Florence, Sienna or Bologna.

Driving the E35 from Bologna down to San Gimignano, I became very impressed by Italian superhighways.

Heading south into Tuscany. There was still a little snow in the mountains.

They are straight – really straight! If a mountain is in the way, they dig a tunnel – some are miles long. If there is a valley, they build a beautiful bridge. And the speed does not normally vary from a steady 80 mph (although that Ferrari in your rearview mirror may be approaching at 140 mph!) You really have to stay in the right lane unless you are pulling out to pass a slower vehicle. I wish stateside drivers would follow suit. It works really well when you follow the rules of the road.

For our day of tasting, I contracted with the wine and food services agency of Vinarium who have been honing their skills since 2003. Together, we planned a comparison tasting between Montalcino and Montepulciano with a break for lunch in a local enoteca. We were driven about by Andrea Caroni who made our tour a pure joy in his new Mercedes van – the only way to see the region without having to worry about how much wine we sampled. 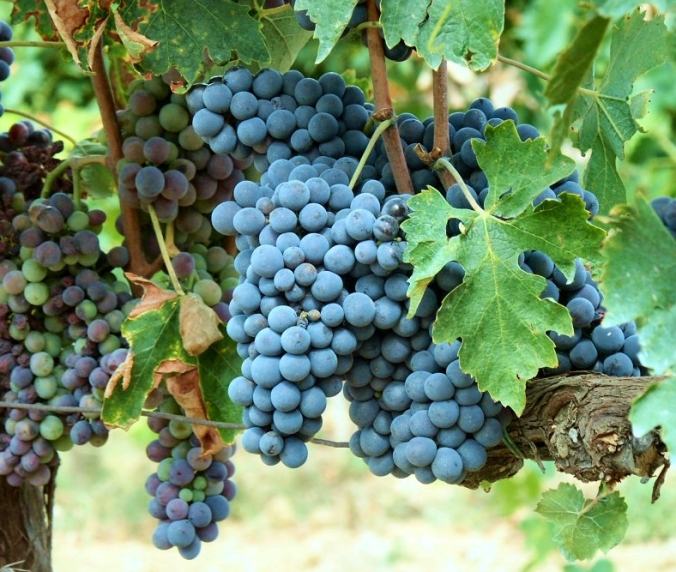 Brunello di Montalcino on the vine.

Brunello di Montalcino is made from 100% Sangiovese grapes, albeit a local Tuscan variety called Brunello (little brown one). It carries DOCG classification and is the Sangiovese that most wine critics cite to be the best in all of Italy. It is required to have a minimum aging of 2 years in oak with another 4 months in bottles (6 months for the Riserva). In all, it is ready to be sold 5 years after the year of the harvest (6 years for the Riserva). It is a clear, brilliant wine, with a bright garnet color. Its intense nose often has scents of aromatic woods, berries, vanilla, and jam. The wine has an elegant, dry body with exceptionally bold fruit flavors, high tannin, and high acidity. Brunello can be aged at least ten years while special vintages can be aged for over thirty. 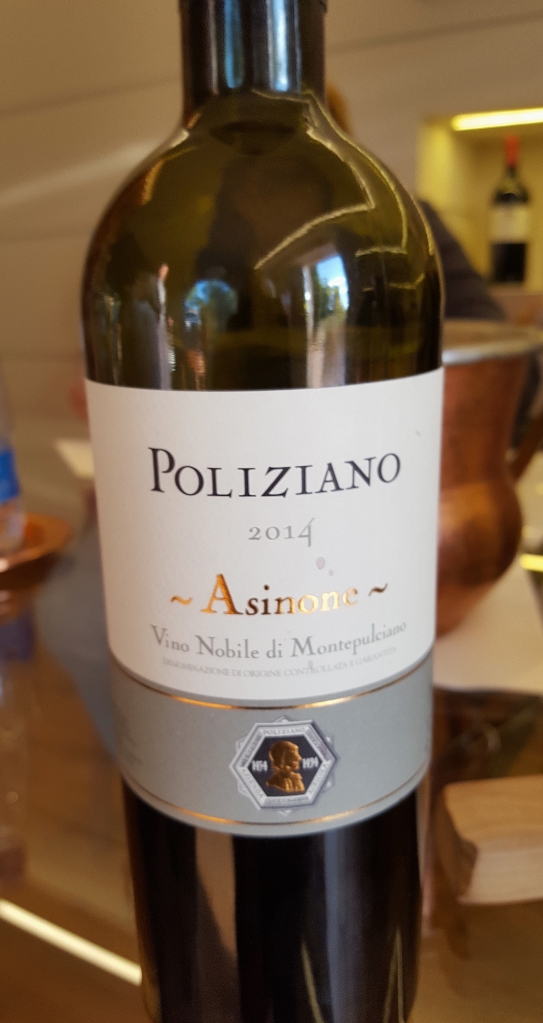 Vino Nobile di Montepulciano, also with DOCG status, is produced in the vineyards surrounding the town of Montepulciano. The wine is made primarily (minimum 70%) from the Sangiovese grape varietal known locally as Prugnolo Gentile, blended with Canaiolo Nero (10%–20%) and small amounts of other local varieties such as Mammolo. The wine is aged for 2 years with at least 1 year in oak barrels (three years for Riserva).

Vino Nobile usually has a garnet color that gradually turns brick red as it matures. It will typically have a lively acidity, moderate alcohol level and a pleasant tannic finish due to a careful use of oak in aging. The flavors channel dark ripe berries, with notes of plum and hints of earthiness. They are also long-lived wines that, if stored properly, will age gracefully for ten to twenty years after vintage.

Our first stop was at Poggio Antico. Like many areas in Tuscany, the roads are narrow and windy as they stretch up the to the fortress hill town of Montalcino. Located just south of town, Poggio Antico is a rustic 500-acre estate of rolling Tuscan beauty.

Cypress trees and olive groves line the roads while the vineyards stretch off towards the sunset. As spectacular as the site is, the wines are no less stellar.

Poggio Antico, a family-run winery, was the brainchild of Giancarlo and Nuccia Gloder. Their passion for the wines and views of Montalcino led them to purchase the estate in 1984 at a time when the area wasn’t quite as in vogue (i.e. expensive) as it is today.

The new wing at Poggio Antico.

The Gloder’s daughter Paola has managed the estate since 1987 and since then has added new vineyards, a new wing to the winery, new state of the art temperature controlled stainless-steel tanks for fermentation and a new cellar area in which to age the wine.

Poggio Antico makes no distinction during the harvest between grapes destined for various wines (except for Riserva) so that the yield and therefore the quality of the fruit used for Rosso di Montalcino is identical to those of Brunello and Altero. 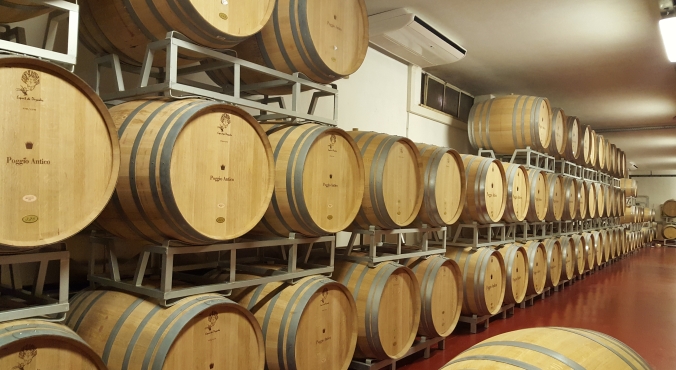 Some of their wine ages in French Barriques.

To my knowledge, they are the only producer in Montalcino to embrace the style and technology of the new world (aged in French barriques) while retaining the passion for producing a Brunello steeped in tradition and aged for a longer amount of time in 500 liter French or Slavonian oak tonneaux.

While some age in huge Tonneaux.

Poggio Antico is on a roll that began 10-15 years ago – not that they haven’t always produced outstanding wines. Robert Parker, James Suckling, Antonio Galloni, and the other “pointers” have almost always given them ratings well into the 90’s with more than a few 97 point wines – no mean feat.

Our host for the day was Naomi Laurie who happened to hail from the U.S.

We were honored to taste six wines which ranged from Great to Oh My God!

Following our tour and tasting, we opted to purchase some wine to ship home. Poggio Antico has a program that covers shipping, customs and handling for one price – the winery handles the whole process. We paid €88 for handling a case (twelve bottles) of wine. This price is, of course, in addition to the price of the wine itself. The cost of the wine including the shipping package is significantly cheaper than buying the same wine from a U.S. dealer. I believe this plan is possible for most wineries in Italy since we were able to get similar deals in several other wineries that we visited.

A brilliant day in Montalcino.

After having our taste buds primed on some magnificent wine, Andrea drove us into Montalcino for lunch at the Enoteca Bacchus.

What a wonderful little restaurant in the heart of Montalcino! It is staffed by the owner Ezio and his wife Rosanna. Andrea was initially planning to leave us to our lunch but we wouldn’t hear of it and insisted that he join us.

Even at mid-day, it was coolish, so we sat inside where the walls were lined with local wines of every variety and vintage and the fridge was humming away – filled with local cheeses and various salamis and hams. The aromas alone were worth the trip. The food was natural, rustic and gorgeous, and the wines were amazing, as I expected in this region. 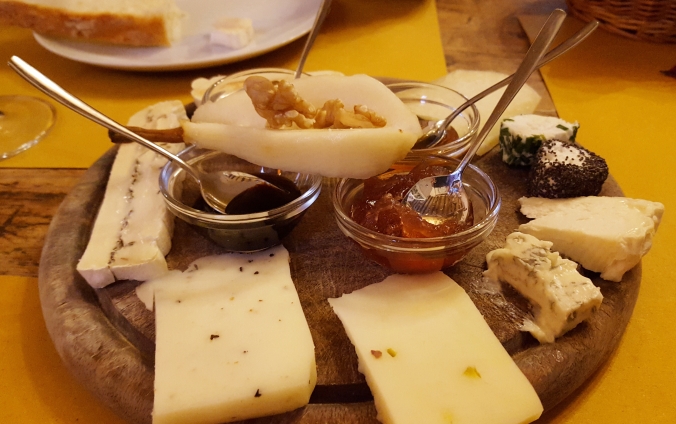 We shared huge plates of delicious meats and cheeses with bruschetta and then ordered their Tagliatelle with Cinghiale which was simply fantastic. 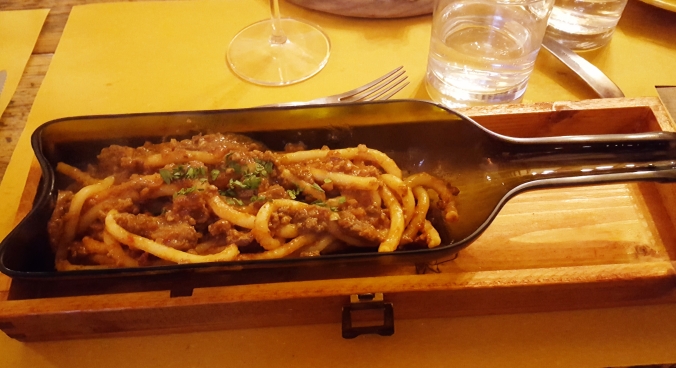 Fresh pasta was cooked perfectly and served “Bolognese” style with a richly flavored wild boar ragu. The dish was served in a wine bottle cut in half length-wise. No one in our group had room for dessert. 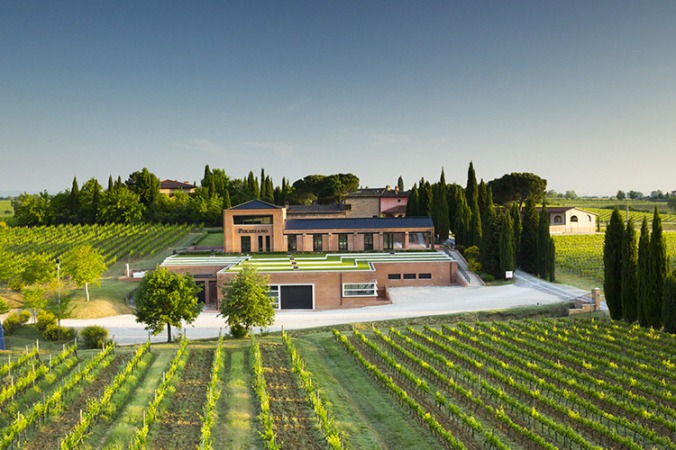 To complete our comparison tasting, Andrea took us up to the Poliziano Estate in Montepulciano. Poliziano is a local idiom for “a person from Montepulciano”. The 395-acre estate (one of the smallest in Montepulciano) was founded in 1961 by Dino Carletti. His son Federico took over in 1980. All wines come from grapes grown in Poliziano’s own vineyards and are harvested by hand. Carletti believes that the region’s own typicity (character) should show in the wines and therefore maintains 100% control of the fruit.

The wines were definitely food friendly – generally spare, elegant and quite dry. They show a fairly light mouthfeel with high acidity and soft tannins. To make Poliziano wines even friendlier, they are quite modestly priced, ranging from €18-€40 with a magical Vin Santo topping the list at about €65. 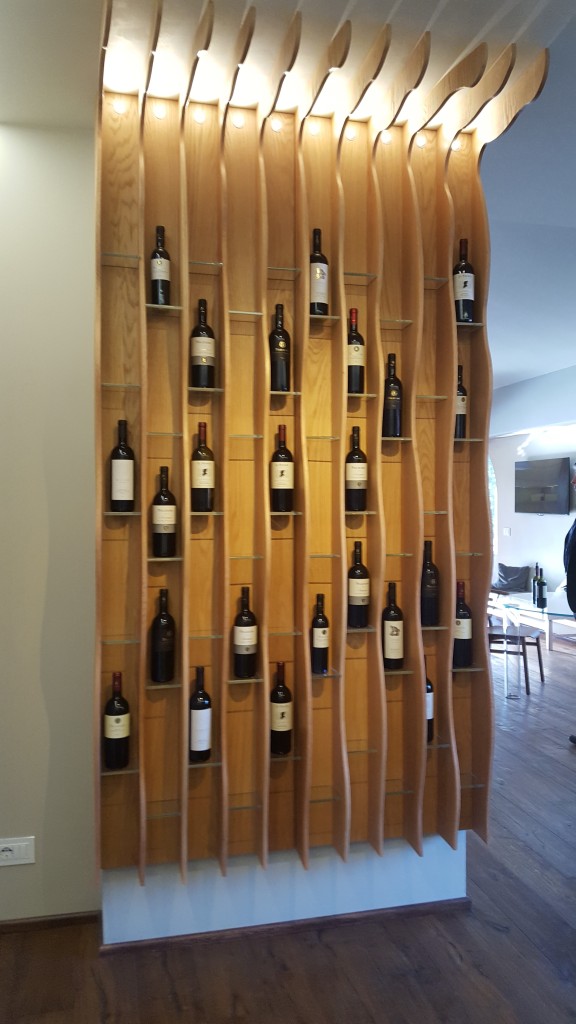 A display of Poliziano wines just outside the tasting room.

The tasting room was a magnificent space that boldly welcomed the 21st century but was never very far away from its historic roots. It is dedicated to one of the greatest Italian poets of the fifteenth century: Angelo Ambrogini with his portrait hanging prominently. Poliziano’s Le Stanze wine was named after Ambrogini’s most famous poem, Le Stanze. 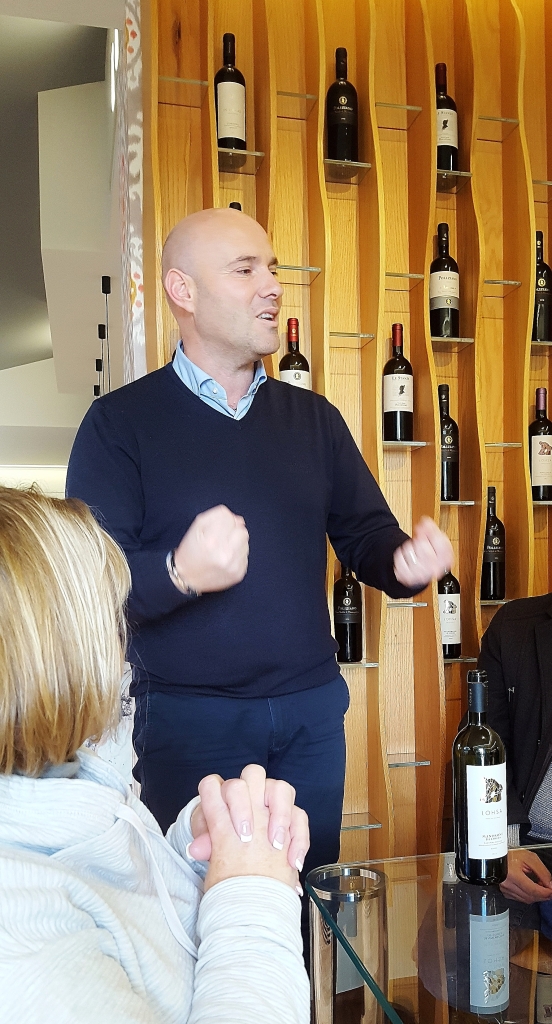 Our extremely knowledgeable and gracious host was Fabio Bertocci. He led us through five incredible wines starting with their Rosso di Montepulciano and ending with that exceptional Vin Santo.