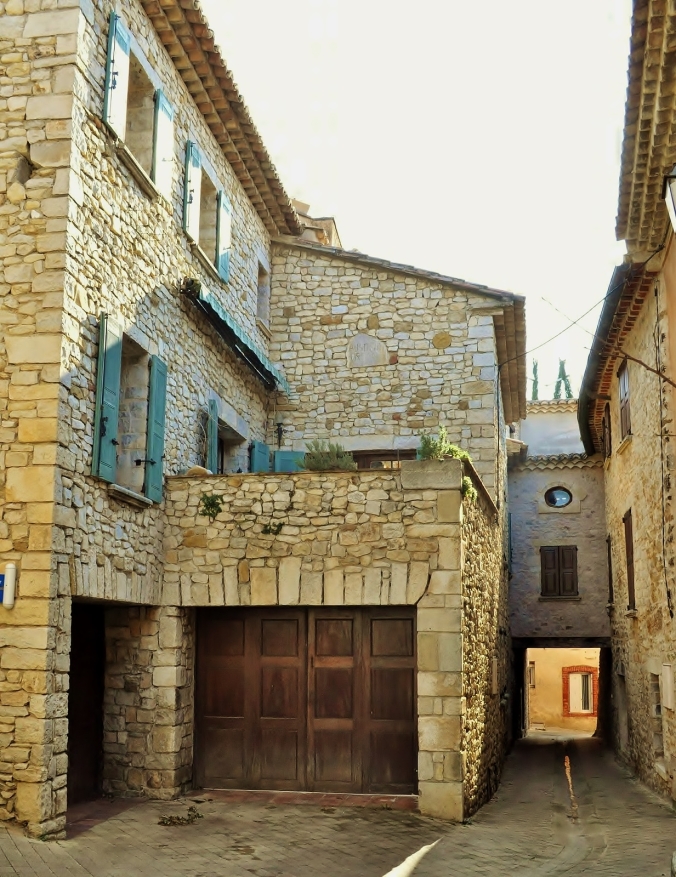 Our vacation house in Sablet*

“Gourmets are thick on the ground in Provence, and pearls of wisdom have sometimes come from the most unlikely sources. We were getting used to the fact that the French are as passionate about food as other nationalities are about sport and politics, but even so it came as a surprise to hear Monsieur Bagnols, the floor cleaner, handicapping three-star restaurants” ― Peter Mayle, A Year in Provence.

Thus begins a passage from Peter Mayle’s famous book A Year in Provence which I read a few years back. Later, after watching a movie based on A Good Year, another novel by Peter Mayle, I promptly stashed the idea of a trip to Provence into my “bucket list”.

Provence has, for years, piqued my imagination with visions of intense blue skies, red- roofed hilltop villages, lush hillsides and fields covered with sunflowers, wild lavender, rosemary, thyme, and terraced vineyards. The luminosity of the sky and the brilliant colors have inspired countless artists including Van Gogh, Matisse, Picasso, Renoir and Cézanne. 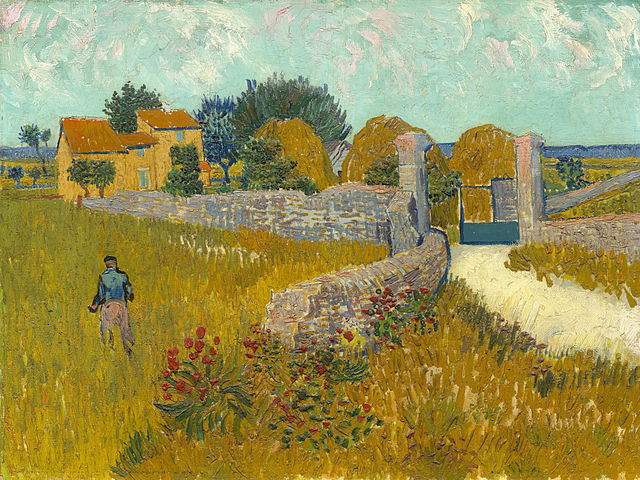 Food and wine play a central part of life in all of France, but in Provence, they are indeed a passion. The hallowed ingredients of Mediterranean cooking are prominent in Provence and almost always include olive oil, wine, tomatoes, and garlic. A gourmand will inevitably add local treasures such as truffles, saffron, saucisson (sausage), cheeses and honey. 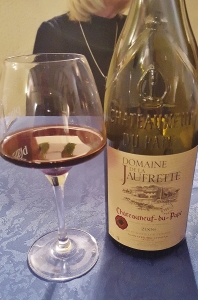 While historically known for light, drinkable rosé wines from the wine regions of Tavel and Bandol, Provence also makes classic red wines: Cotes du Rhone, Vacqueyras, Gigondas, and Chateauneuf-du-Pape. How could any food lover not want to experience the region’s glorious cuisine and the earthly pleasures of Provençal life?

My friend Michel owns an historic vacation house in the commune of Sablet, located in the heart of the southern Rhone Valley which is in the Vaucluse region of Provence. 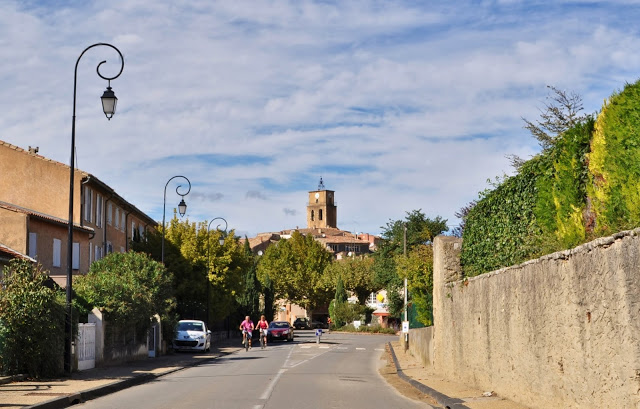 The village of Sablet*

Over a delightfully lengthy lunch, he told me all about Sablet and his house. The deal clincher – his house is only eight minutes to Gigondas or 20 minutes to Chateaneuf-du-Pape. By the time lunch was finished, I was mentally packing my bags.

Sablet is a small, medieval village still fortified with many of its 14th -century ramparts and towers. The houses are huddled around the bell tower of the 12th century St. Nazaire church.

A street in Sablet

Cobble-stoned passageways are so narrow you can easily imagine parishioners in a donkey cart riding up to the church – certainly no cars could fit. The lanes coil around the town and are often sheltered by stone beams and adorned with flower boxes. 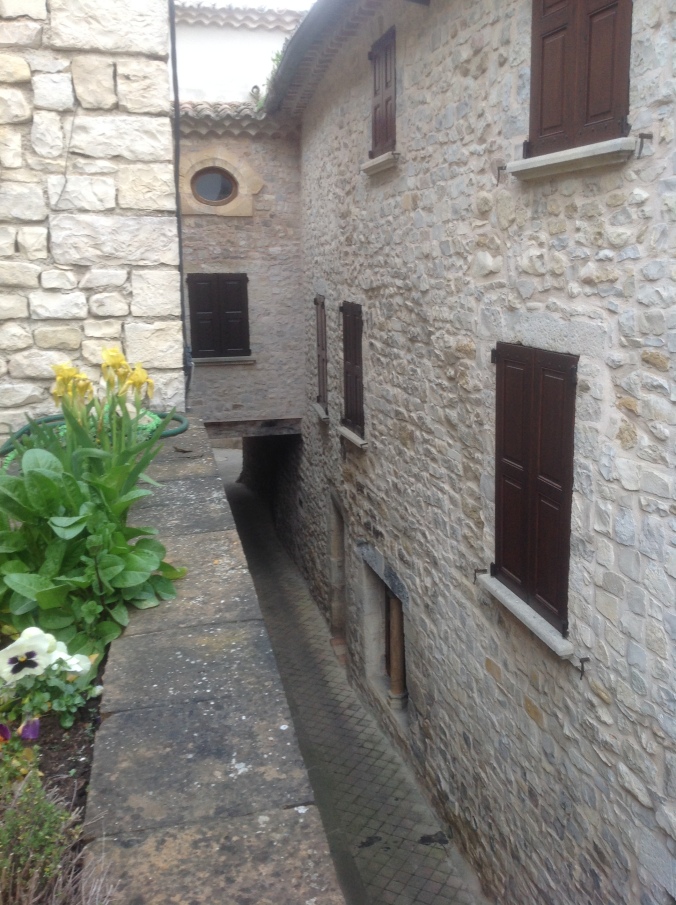 View from our balcony.

Michel’s house is located in the center of the village, just down the street from the church. It was built in the 17th century to house travelers and pilgrims who came to worship in the church. 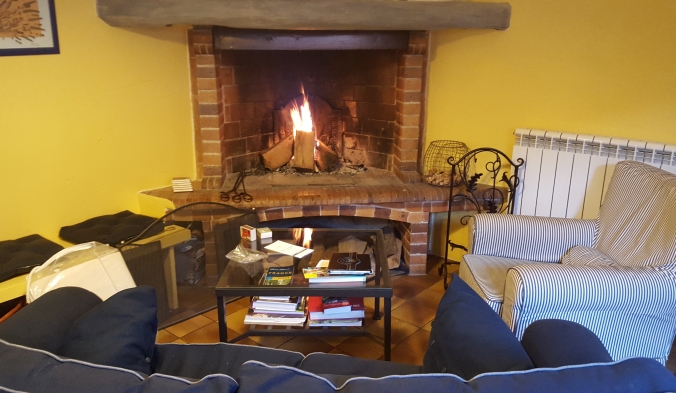 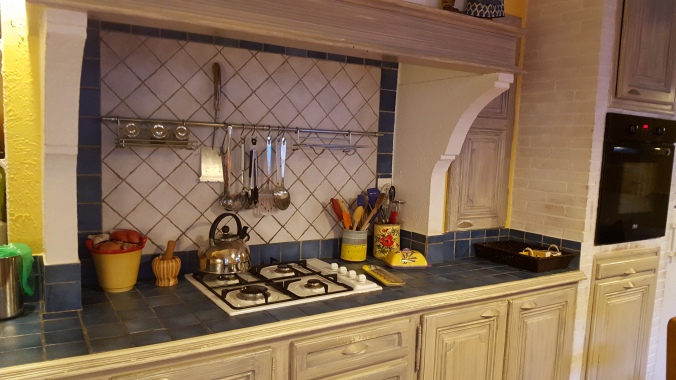 The interior of Michel’s house has been renovated for contemporary living, but still retains its medieval character and charm.

In early April, we motored down to Sablet from Lyon with friends who spent the week with us. As we entered town, the wind started to come in from the Rhone Valley. A local UK expat told us that it is called a Mistral, and when it blows from the south, there is usually rain. Peter Mayle declared that a Mistral “would blow the ears off of a donkey” and we quickly learned to appreciate the house’s solid stone walls that were almost a yard thick in some places. The next morning, the beginning of our first full day in Provence, the sun was shining brightly and the impossibly blue skies were clear in spite of the Mistral. A good omen.

Without planning to do so, we settled into a daily breakfast rhythm that obliged the earliest riser to walk down to the boulangerie (bakery) and pick up a bag of warm croissants. 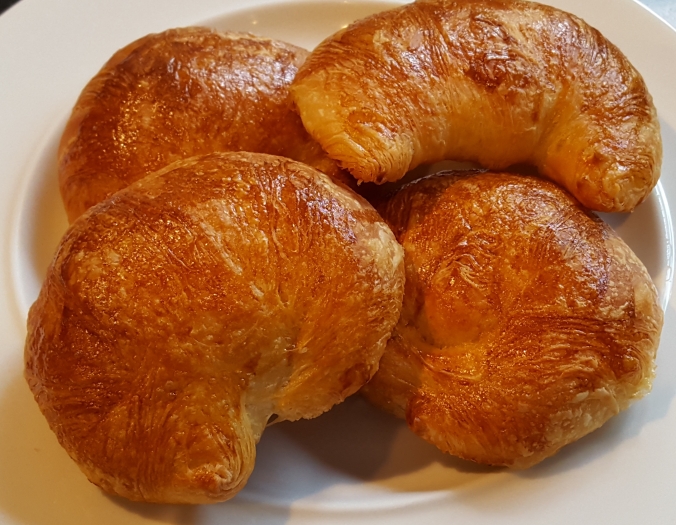 There are few things that can surpass the pleasure of beginning your day with a warm butter croissant and fresh hot coffee. Some French prefer to dunk their croissant in their coffee, but I don’t. Croissants need to be flaky layers, not soggy pulps. The more crumbs and flakes left on the table and on your clothes, the better. There are some serious arguments among connoisseurs about how many croissants are sufficient for one breakfast. I settled on two. One is barely enough to prime your taste buds while three regretfully borders on piggishness.

If my first day in Provence was any example, this was going to be a grand adventure.

12 thoughts on “A House in Sablet”