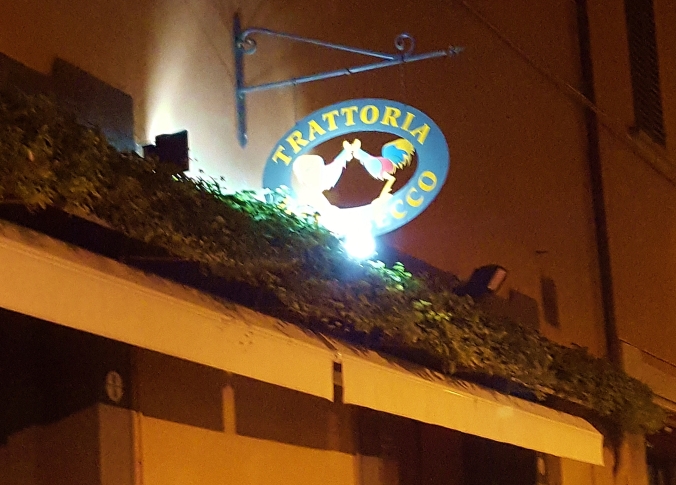 “Life is a combination of magic and pasta.” ― Federico Fellini

Our trip to Italy did not begin quite as pleasantly as we expected. The flight from San Francisco to London departed almost two hours late but we hoped that wouldn’t be a problem because of a four-hour layover at Heathrow before our connecting flight to Bologna.  After watching three in-flight movies, eating some pretty awful food, and dozing, we arrived in London only one hour late. After deplaning, we discovered that the flight to Bologna was also leaving an hour late – now set to arrive at 6:30. So, timewise, we were back in sync.  We had dinner scheduled at Trattoria Battibecco for 8:30 – tight but doable.

Bologna under 4″ of snow

We got to the Bologna area and noticed on the in-flight screen that we were circling the airport… and then circled some more. After almost an hour, the pilot announced that Bologna had experienced four inches of snow that afternoon, had six other planes stacked up on the tarmac. and were trying to deal with all of us.

Suddenly, we noticed that we were headed northeast away from Bologna. The pilot let us know that we were headed for Venice to refuel. On the ground, in Venice, we saw the fuel trucks pull up, do their thing and pull away. And we sat… and sat. Now is when we began to experience mild(!)panic. We could picture being stashed at the equivalent of an Italian Holiday Inn for the night and having to get to Bologna on our own. Aside from our B&B and Trattoria Battibecco reservations, we had the Taste Bologna tour scheduled for 10:00 the next morning.

After another interminable wait (still aboard), the pilot assured us that we would fly back to Bologna as soon as a gate was secured and British Air had newly approved flight plans. In the meantime, everyone on the airplane was getting hungry and  grouchy, or as the Brits say, “a bit bothered.” Luckily, Karel (ever prepared) had a bag of dried California apricots which she shared with all of our surrounding (new) friends. We got to know everyone around us – an Italian group returning from a swing dance competition, a couple from England celebrating the husband’s 70th birthday, and two delightful young Italian women who spoke perfect English and volunteered to call our B&B and Trattoria Battibecco to let them know about our plight. They convinced the manager of the B&B (who would normally be at home by now) to stick around until we arrived. The restaurant agreed to seat us up until 10:00 but could not wait longer because the cooks and waiters had been working all day with no break because of the snow.

At last, the plane left Venice. We could relax – or so we thought. Upon arrival in Bologna, we trundled through customs and set out to retrieve our baggage. No problems now – right! After another hour, we found that the baggage handlers had been allowed to go home at 6:00. Apparently, there was an important soccer match on tv that night. The airport had to round up someone to unload the baggage. WHAT?? The only amusing part of this fiasco was watching irate Italian women screaming directly in the face of airport security guards, letting the guards know their opinion of the state of affairs! Even after our bags finally arrived, it took a while for a taxi since they were backed up trying to service the huge angry mob.

At 12:30 a.m., we arrived at our B&B. The manager was patiently waiting to register us but soon disappeared – probably well past his bedtime since he had to be back at 7:00 the following morning. Nonetheless, he was cheerful and told us about a few neighborhood bars where we might find something to eat. We were tired and starving and ended up with some packaged muffins that were left over from breakfast and collapsed into our bed.  Great first meal in Bologna!

The next morning we telephoned Trattoria Battibecco and were able to reschedule our dinner. We were finally able to head out to learn about Bologna (see La Grassa).

Trattoria Battibecco is an understated establishment that serves some amazing food. The chef-owner is Nico Costa. His wife, Erika, tends to the front of the house and pampers her customers. When we introduced ourselves, she immediately remembered our difficulties from the previous evening and made us feel exceedingly welcome. 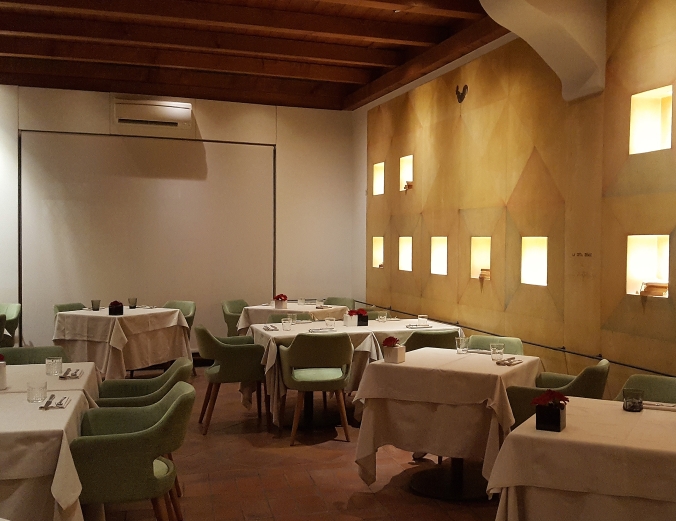 We were the first customers in the dining room that evening.

The rooms are minimal and elegant with warm wood-beam ceilings, wide spacing of tables, and lovely off-white linen tablecloths. Impeccable service – but not austere –  in a calm setting, places this restaurant above most neighboring trattoria – indeed the ambiance is much more sophisticated than the word “trattoria” would normally suggest. Yet, it is not lacking in atmosphere which is charming and comfortable. And, it is located only five minutes from Piazza Maggiore.

The selective menu was a challenge since each mouth-watering option was appealing. It simply meant that I have no choice but to return – a happy outcome of the whole experience. The food was beautifully presented and tasted incredible – ridiculously inexpensive for the quality – certainly worthy of a more elevated Michelin accolade than it currently holds. Traditional elements of Bolognese cuisine were re-vamped with unexpected ingredients and cooking styles and presented with extreme care.

After choosing our dinner dishes, Erika offered us a taste of two white wines available by the glass. Both wines were totally new to me.

One from the north and one from the south. The first was a 2016 Pacher Hof Kerner that came from one of the most northern mountain regions of Italy (near Austria). Kerner is the grape. The wine had a bright straw-yellow color with greenish reflections, a pleasing fruity bouquet and a juicy, lively flavor with a long mineral finish.

The second was the 2016 Alessandro di Camporeale Benedé Catarratto. Catarratto is one of the oldest native grape varieties in Sicily. It was pale yellow in color with notes of white fruits and citrus on the nose. It was fresh with a juicy texture and a crisp fruit flavor. We ordered one glass of each to share. 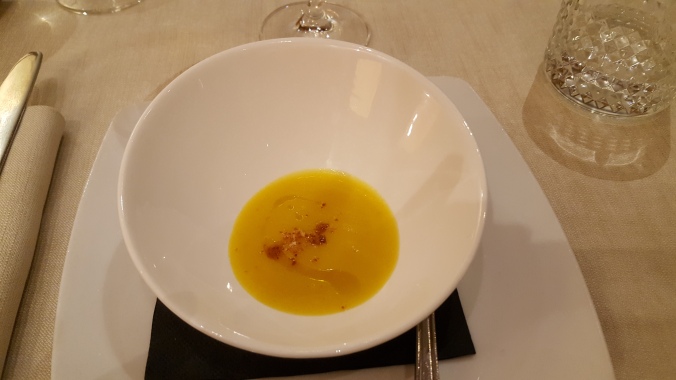 We were soon served an Amuse Bouche – a brothy potato soup. It was warm and satisfying for the cold evening.

For our Primi Piatti, I had to order the utterly classic tortellini in brodo.  The tortellini were stuffed with meat and served in a golden broth made from capon (with some beef in the broth as well). In Bologna, you can find tortellini served in a creamy sauce—but, trust me, the broth route is supreme. I have eaten this spectacular specialty in several places but this one was unquestionably the best in my experience – rich broth, nutmeg-spiked tortellini, the resilient chew of a lifetime!

We also ordered a bowl of risotto flavored with some local pumpkin, gorgonzola cheese “drops” and crumbled amaretto. I am always happily amazed at Italian chefs’ ability to produce the perfect risotto. It was both creamy and al dente while the amaretto provided a little crunch. 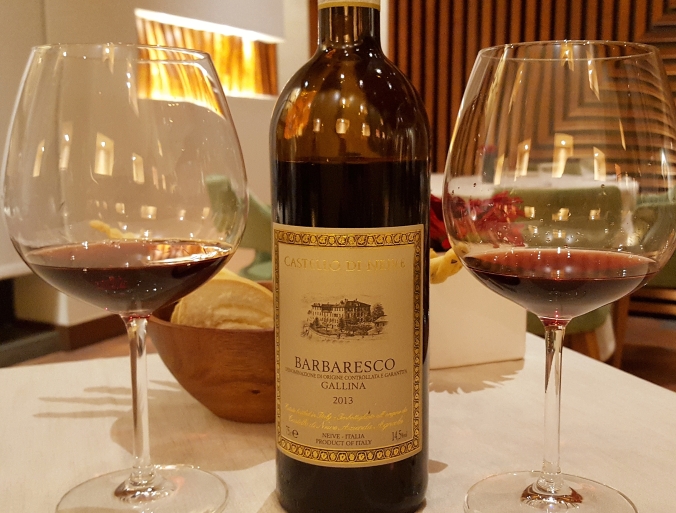 Somewhere in here, our dinner wine arrived., a 2013 Castello di Neive Barbaresco Gallina.  It had a garnet color with aromas of red fruits and cassis.  The tannins produced a beautiful mouthfeel that was neither astringent nor tight. It went perfectly with our Secondi Piatti. 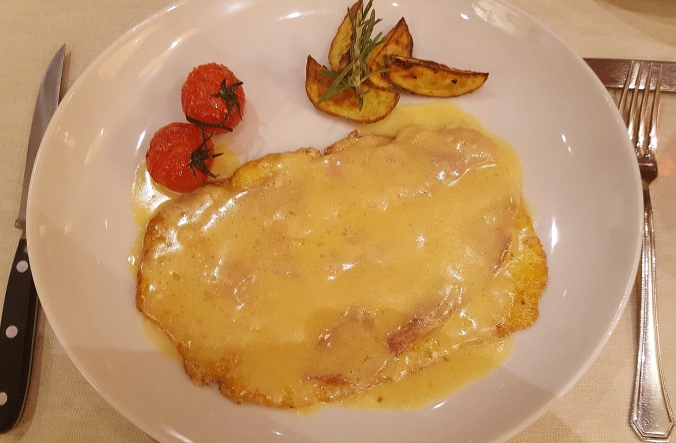 As in all cooking at Trattoria Battibecco, the key was subtlety and refinement. That’s certainly what I experienced with the Cotoletta alla Bolognese, topped with ham and parmesan cream. Here was a long, thin slice of veal, topped with a perfectly fitted slice of prosciutto, and finished with a tan, buttery glaze of heaven. This is a premier example of an iconic Bolognese dish that has earned a global reputation for the food of Bologna. 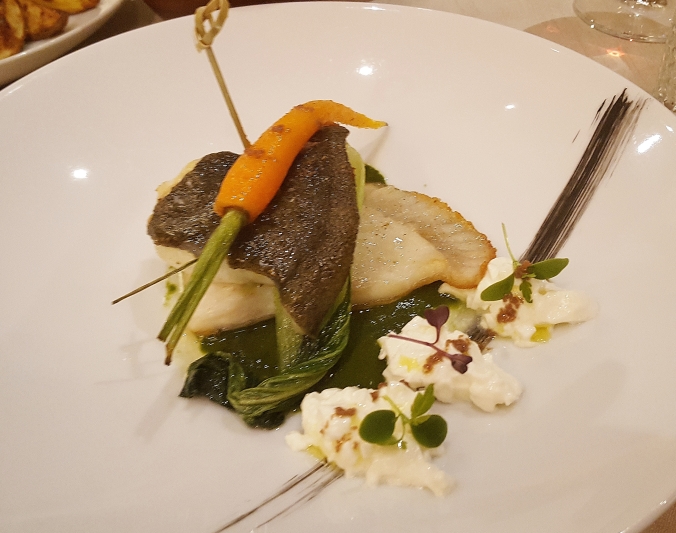 Chef Costa has not only developed his cuisine based on traditional meat dishes but also offered rich and creative choices of fish. We selected a Roasted Turbot Fillet which came with fresh burrata, anchovy oil, and a bitter chicory cream. Turbot is one of the world’s best tasting white fish. It is native to Europe and is right up there with Dover Sole. It had a gleaming white flesh with a large flake and an excellent mild flavor. The fillet was carefully cooked with the skin on as turbot easily and quickly dries out when roasted. We enjoyed everything about the dish but the chicory cream which was slightly too bitter for our taste. Nevertheless, the turbot itself was sublime.

After a huge meal like this, we didn’t want (or need) a heavy dessert. Still, we couldn’t just walk away. We settled on sharing a nice warm puff pastry filled with spiced apples and some vanilla ice cream. It was comforting and delicious.

I didn’t know that the restaurant had been awarded a Michelin Plate until returning home but can certainly understand why. The food was outstanding and very reasonably priced for the quality. In my opinion, it is certainly worthy of a more elevated Michelin accolade than it currently holds.